October 3, 2015 – Kemer (Turkey)Race Day 2 at Red Bull Sea to Sky 2015 was a big day for Wade Young. The 19 year old KTM rider Wade Young from South Africa surprised those who had expected the likes of Jonny Walker (UK, KTM) or Graham Jarvis (UK, Husqvarna) to win the Forest Race at the most enjoyable Extreme Enduro event. The time difference between the podium finishers was just 5 seconds! Walker came in three seconds behind Young and Graham Jarvis two seconds behind Walker.

Walker with the fastest lap in the qualification heats

The Forest Race track had been designed by Klaus Sørensen of the XVENTURE team together with the Kemer Enduro Club and they did a lot of good work on it. About 80% of the track was new. Besides single trails in the forest there was quite a bit of riding in riverbeds, all ridable for everyone – the Pro riders had a big smile on their face after the finish line. 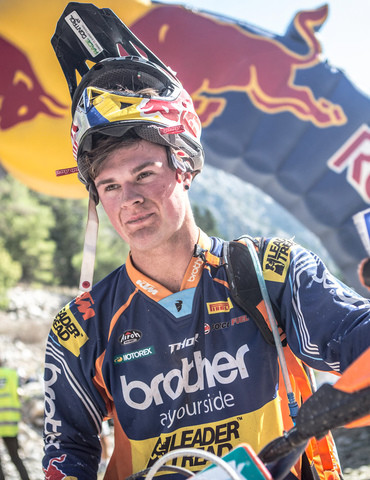 Having won the Beach Race on day one of the most enjoyable Extreme Enduro on the face of this planet, the 24 years old Walker was the first to start the Forest Race just a little outside of Kemer. Graham Jarvis really pushed hard right from the start to close the 30 seconds gap having to start 2nd behind Walker. Following the live time keeping – which is provided on the Red Bull Sea to Sky website – the two exceptional riders from the UK were very close. It took the top 10 just around 1 hour and 30 minutes to finish but in the end it came down to seconds that made the difference.

When Graham came in everybody knew it would be a very close result. Graham had been pushing very hard to close the gap for the entire duration of the Forest Race and you could tell by his rather aggressive riding style on this day that Graham was willing to give whatever it takes to win. During some sections of the race, Graham was in the lead but Jonny was able to fight back in the last parts. It didn’t work out for Graham in the end – he was just two seconds slower than Jonny on a 46km track!

But when everybody was speculating about a win of either Walker or Jarvis, the two times winner of the legendary Roof of Africa, Wade Young (KTM) rushed into the finish. He must have been on fire since he had started the Forest Race as the 8th rider, thus 4 minutes behind Jonny Walker.

Quotes from the Riders

Having had some bad luck in the past here and there, Wade Young was really happy: „I got into a good rhythm about quarter of the way in and caught the guys up ahead and built my confidence. I made a few mistakes but Im pretty happy with the day as you can tell. Tomorrow means a lot because I was pretty devastated last year getting stuck right at the end and missing the podium. I just want to be smooth and fast at the beginning and push all the way through and not make the same mistake as last year.“

The 17 year old Manuel Lettenbichler (GER, KTM) – the son of Andreas „Letti“ Lettenbichler – showed a superb performance in the Forest Race. He started in position 10 and finished 4th, he passed top riders such as Paul Bolton and Ben Hemingway. On the final invoice he beat his father Andreas „Letti“ Lettenbichler by more than one minute – the first time ever that „Mani“ was faster than his Dad! Here’s what he had to say: „The track was ace, simply a great ride, very fluent and I enjoyed it big time. I was happy that it wasn’t that hard to ride because I damaged my foot the day before the Beach Race. I really liked this track a lot and it’s great to start from the first row again tomorrow.“

Andreas “Letti” Lettenbichler: „Nice single trails, into the riverbed and out again and again – a big compliment to the crew who designed the track! I had a good flow throughout the entire race today even though I chose the wrong mousse for the race. It was too hard and I should have used a softer one. But I still made it into the first starting row for the main event tomorrow. Seeing Manuel on the 4th place makes me really happy. I expected him to beat me one day – that day has come now and it’s a great feeling.“

Burak Özdemir (TUR): „It is the 6th edition and I think it is the hardest, I am a local rider and it is really hard but enjoyable. The Beach Race was different because it was like extreme Enduro Cross in the sand! I saved my energy for today by not going into the finals yesterday even though I qualified. We are lucky it is not wet or raining because the tracks were so good today but if they were wet, it would have been hell! My hope for tomorrow is finish in the top 20.“

There will be a live time keeping on our website so you can follow the race pretty much in real-time. The scanned times will be displayed to you get to know what checkpoints the riders have come in and at what time. Please note that due to reception weaknesses in the mountains there might be delays in transmitting of the times.

The Red Bull Sea to Sky app for both, Android and iOS devices are offered. It contains maps of the three races, start list and results and it’s a great source of information for both, riders and fans. The app is ready for download and installation in the Apple App Store and the Google Play Store, just search for „Red Bull Sea to Sky”. 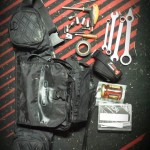 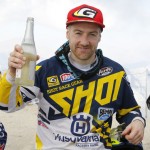